On a recent visit to my mother ‘s house, I sat in the big, black leather chair my Dad spent much of his last years in, either sitting or, at the end, sleeping at night. It was strangely comforting to sit and visualise him as he used to be, remote at his side, hand across his tummy and legs crossed neatly at his very white ankles, even if it brought a tear to my eye. And I looked across at the chair opposite and imagined my long-gone grandmother sitting in it, 40 years ago and as straight as a ramrod,  viewing the world from her corner on her weekly Sunday visit. The visions are crystal clear despite the elapse of years.

The furniture in that room, and the house, has been there a while and there’s a lot of history in them. They wrap their feather cushions and legs around you in a warm furniturery-sort of embrace and remind you of years gone by and the people who sat there and the conversations, and make you feel all soft and squishy with emotion.

But they also grab you tightly by the jugular, and squeeze, ever so gently but with steely stamina and persistence, and won’t let you go. You are in their grip, or under their spell. At least I am. Especially when we start deliberating – again – about whether we  possibly need to get rid of a piece of furniture in our home that we’ve inherited and bring in something new, or just make room.

And that is the dilemma.  Did you notice the term ‘Get rid of’?

It’s so callous and unfeeling, and permanent. Erasing a little bit of your family history or children with one little decision. So much easier to defer, put off, procrastinate. Hoarde.

I come from a family that doesn’t discard furniture easily, so I blame genetics, or training at least. See, it’s not my fault. My mother’s house is furnished with all the same pieces she and Dad bought when they were just a few years into their marriage. Good quality stuff that’s stood the test of time. The upholstered items have been recovered (the lounge upholstery necessitated  when ‘Whitey’ the pet mouse escaped overnight and chewed a whole in the fabric – nothing like a catalyst) but the furniture is still pretty much the same condition as it ever was. Clearly us kids weren’t as prone to smearing yoghurt into cushions or in accidentally weeing on couches, or smashing tables with meat tenderisers or jumping on beds as toddlers and young’uns are some are wont to do nowadays.

When my uncle died a few years back and my aunt moved to a smaller place, she asked if I wanted my grandmother’s Victorian lounge chairs which my uncle had. Of course I did. Not because they were valuable or even because I really loved them. Or even really liked them. Because I’m such a sentimental sop, and they were Nana and Pop’s, and I remember clambering over them when I was a little kid. They’re quite short and perfect for small children to climb on, as two year old Munchkin has recently discovered. And if I didn’t take them, what would happen to them? A charity store where no one would know about their history, or the people who sat in them? They would be discarded, dumped, like sad and unwanted kittens, with no one to love them. No, that wouldn’t do at all.

So, they are in my lounge room, next to Nana and Pop’s wingback lounge suite that I am already the custodian for. But the thing is, it’s not the furniture that we actually want to have in our lounge room. It’s quite lovely, and bloody good quality, which of course means it’s never going to wear out, ever, thereby eliminating wear and tear as a possible excuse for replacement. It’s just someone else’s choice which I’m agonisingly attached to.  Remember that jugular?

If you inherit jewellery that isn’t t really your thing, or a set or glasses, or even a painting, you can pop that away somewhere to satisfy your family sensibilities, in a cupboard or against a wall in the shed. But furniture overtakes your house. There’s only so much you can stack up in the room that’s actually supposed to be a usable rumpus room but gave up all claims to such status years ago when it bore far greater resemblance to a removalist van than an actual room and the stacked furniture was literally just centimetres from the ceiling.

Of course, sometimes it works out and practicality meets sentimentality in a happy intersection. My sister’s girls slept in the beds she and I grew up in, my other sister has adopted our parents’ lounge chairs and breathed new retro-life into them with new covers and groovy cushions, and still uses Nana’s cane dining table.

You see what I’m up against? We’re all doing it. Even if the nature part of the equation wasn’t going to catch me, the nurture part was sure to bring me unstuck.

So here I am agonising about the pieces I have stashed and my role in determining their final fate. The kidney-shaped bedroom side table I grew up with and also served time in my daughter’s room, sits sad and forlorn covered with a towel waiting for a decision. Problem is, that now adult daughter can’t fit it in her daughter’s room, and it doesn’t really match anyway. But she wants me to hang on to it – just in case. God help us all – she’s got the same genes too.

We attempted to clean out the ‘studio’ yesterday with the vague notion it would be useful to be able to use the room at some stage, but all we managed to get rid of was two boxes of old books and a couple of cane baskets. I don’t think that’s enough. 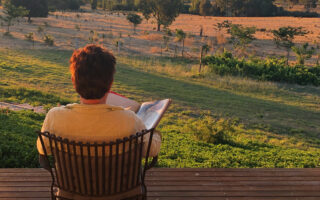 A holiday done differently: kicking back in the country